Arrow up
Arrow down
CAVALIERENEWS 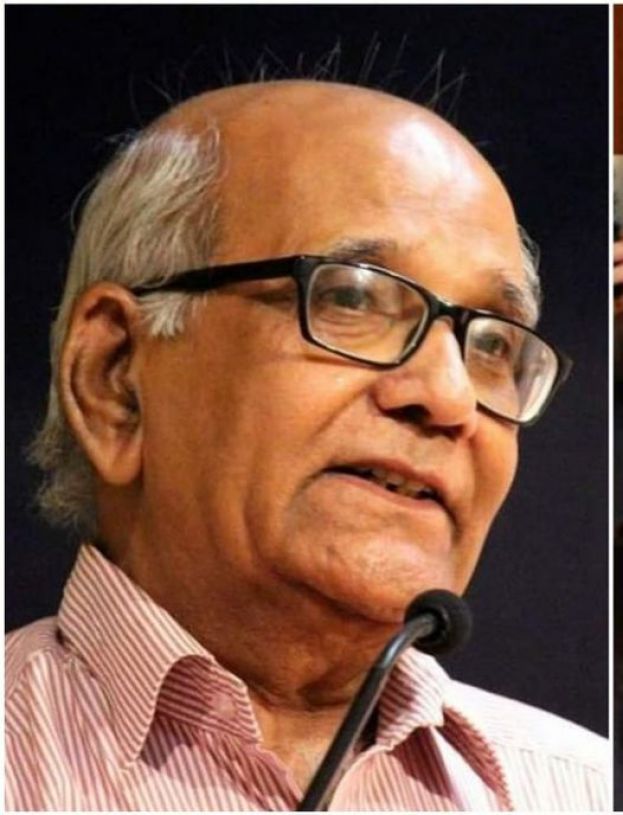 Padmashri Dr.Vishnu Pandya and Mr.Goffredo Palmerini are in the Jury for deciding of a prestigious world award

"Two media personalities and great people rich in human values, from India and Italy, have been appointed Advisors of Screening Committee of World Pictorial Poetry & Art Forum(C) for the selection of poets, writers and artists who present their candidacy for the prestigious 2021 Award of the highest  rank, to be conferred upon world poets, writers and artists who have distinguished themselves particularly in the field of literature, figurative arts and other arts, such as Poetry and Photography, Prose, Fiction, Painting and modelling .All artistic disciplines presented under a universal banner of Peace, Love and Humanitarian Values, as foreseen by the World Pictorial Poetry and Art Forum(C). They are Dr. Vishnu Pandya and Mr. Goffredo Palmerini, both journalists and writers, whom we congratulated.

Padmashri Dr .Vishnu Pandya is a journalist, biographer, poet, novelist, writer and political analyst from India.  He is  president of Gujarat Sahitya Akademi since 2017. Pandya writes articles on politics, history and historical places which are reported in several newspapers and magazines, among the most read in the state.  He has been active in journalism for 40 years.  In addition to writing articles in the Indian press, he is Secretary General of Vishwa Gujarati Samaj.  Vishnu Pandya was born in Mavadar (Junagadh, India) on September 14, 1945. He studied at Bahauddin College in Junagadh.  He began his journalism  career with the weekly Sadhana, then became an editor at the age of 22.  He was honoured by the editor of All Indian Newspapers for his protest against censorship during the Indian Emergency (1975-77).  Pandya managed to publish the magazine and write against censorship.  He has taught journalism at various universities in India and boasts over 100 non-fiction books on journalism, biographies and other topics.

Mr Goffredo Palmerini, journalist and writer, is a media icon in the world.  Born in L'Aquila (Italy) on 10 January 1948, he was director of the Italian railways and deputy mayor of his city for many years. Member of prestigious cultural institutions, he writes for numerous newspapers in Italy and abroad, for many of which he is a collaborator and correspondent.  His articles are published in newspapers and magazines in Argentina, Australia, Belgium, Brazil, Canada, Chile, Denmark, France, Germany, Great Britain, Luxembourg, Mexico, Peru, Dominican Republic, Spain, United States, Sweden, Switzerland, South Africa  , Uruguay and Venezuela.  He has written and published 10 books and his contributions are featured in many other publications.  He has been awarded numerous national awards for Culture, Literature and Journalism.  A scholar of Italian emigration, for many years he has been actively involved with Italian communities around the world, including through conferences and seminars, in Italy and abroad.  We have already congratulated Mr. Palmerini & Dr. Pandya. “

So writes Sethi Krishan Chand, announcing with pride and satisfaction the appointment of the two journalists and writers and their acceptance of the position, also congratulating them on their great work in the field of Media, Literature and Art.Founder President Sethi himself announces that the rules governing the presentation of the 2021 nominations for the World Prize will soon be published, the aim of which is to spread love, peace and humanitarian values ​​globally, under a single banner.

Sethi Krishan Chand, 68, was born in Punjab, a region in the far north of India bordering Pakistan.  Two degrees and a master's degree (English Literature, Insurance Sciences) in three distinct Indian universities, Sethi was then Deputy manager in  United India Insurance Co. Ltd for 35 years, until 2012. Fine poet, writer, artistic photographer, has published 31 volumes of pictorial poetry and large tabletop albums: 650 pictorial poems, about 500 short and micro poems stand in his production. Sethi considers himself a loving poet.His subjects are simple, beautiful and clear, framed in his visual poetry.  It was a true forerunner, introducing a new concept of pictorial poetry in in the world where in photography and poetry come together in an effective synaesthesia. The language of the body of the image is always combined with the theme of a poem. This way of writing lyrics is spreading rapidly in

the world of poetry and social media.